The first signals from the new satellite UKube-1 have been received in Moray.

Mark Dammer in Kinloss used a combination of electronics and ingenuity to get the signal from the satellite on its first pass overhead - and here it is! 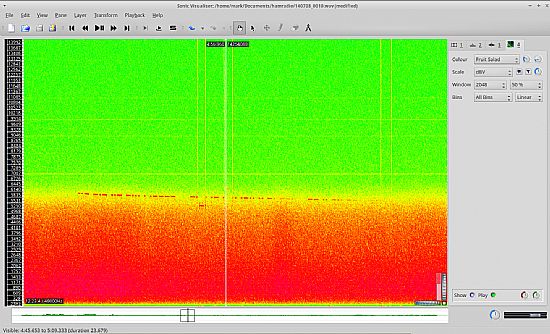 The satellite was launched this evening from a Russian Fregat spacecraft carried up by a Soyuz rocket, launched from Baikonur in Kazakhstan. It was put into orbit just after 7.30 pm and started its first pass over the UK at 8.20 pm.

Mark was working with two receivers. The first was the FUNcube dongle, specially developed by the AMSAT organisation of amateur radio satellite trackers who have put together one of the units which UKube-1 carries. He brought the signal to the dongle from an omnidirectional grounnd plane antenna on a 3-metre mast.

His second receiver was a handheld one, and the antenna was one that he constructed himself - out of an old Venetian blind! 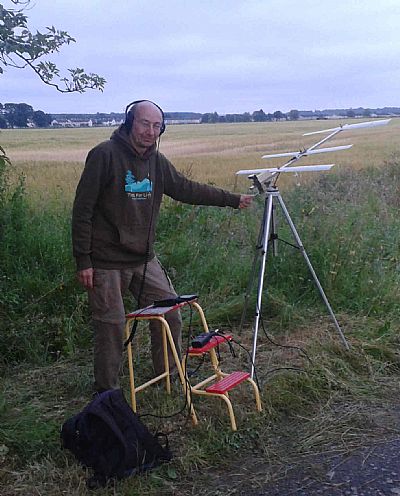 The achievement was all the more remarkable as on the first pass the satellite was low in the sky, no more than 5 degrees above the horizon. On its second pass its path rose to a peak of nearly 30 degrees

Mark has been promoting satellite tracking in Moray and in Scotland and is taking forward ideas through the T-Exchange, a group set up in the Moray & Highland area under the auspices of the British Science Association to encourage hands-on exploration of technology. The Association also provided support to the satellite tracking project.

He has written some background information here on the site, and will be demonstrating his techniques later in the year at the T-Exchange. Its next meeting is in the Village Centre in Findhorn on Friday 18 July.